My body had bled for so long, I couldn’t remember what it was like before. And that was not the only thing that hurt. People saw me and screamed, “Uncle-e-!” but then, when He said, “Go now in peace . . . my life changed.”

For so long, they’d made me stay away.

Always alone, I was lonely. Twelve years is a very long time to be by myself. I was hungry and cold, but that was nothing compared to the pain I felt left to bear the grief on my own.

Every shekel I spent on one medicine man after another. Many wouldn’t even touch me. Others sold me curses; things that did not make anyone feel better, but maybe themselves.

Then, I heard about Jesus.

I cannot explain it, but I knew in my spirit and had to get to Him. I believed . . . no, I knew  . . . if I could just touch Him, I would heal. Faith was the substance of the things in which I hoped.

He was my chance, my only chance.

Desperate I have nothing left. All my money, all my possessions, anything I had was gone.

I was so weak I did not know if I could press through the crowds. It is against our law for an unclean person to touch another. People tried to keep me away. I had been pushed aside many times.

Everyone gathered around Him. I could get close.

With my hand, I reached through the crowd to grab hold of His robe

And then I felt it, my body stopped bleeding straight away after all those years. I fell to the ground astonished, amazed. After everything I had been through, it was finished.

“Who touched me?” I heard as if through a tunnel, but with no accusation, only acknowledgment. I turned my face to His voice. With all the people reaching for Him, He knew my touch.

Tempted to hold back because of the others, I flinched. Should I be afraid? Then I look into His eyes—after twelve years, He was the first to look me in the eye—and I could not hide. He did not call me unclean and run. He knew my touch and He reached back.

With so many around, He and I were alone. I trembled.

I could not hide, not from Him; I would not hide. My body shook as my story poured forth. My pain dissolved and transformed my soul with thanksgiving and with praise.

As I told the truth, I healed.

I could feel it. The others stared as usual, but their scorn held no power anymore.

I looked at His face, His beautiful face, and I saw no shame. That is when He poured forth the final blessing, the last healing I so desperately needed when He spoke “Daughter,” He revealed His love for me.

Strength returned to my body and joy to my soul. I danced as I praised Him. Like a little girl, I swirled ’round the people noticing smiles on their faces.

For the first time in a very long time, I became the object of another’s enjoyment. I’d tried to be invisible because the only awareness I drew was the attention I did not want. But this, this was different.

“Daughter,” He said again, “Be of good comfort; thy faith hath saved thee. Go now in peace” and I could do nothing but . . . go now in peace.

Lord, I ask You for a touch like that today for each one reading, the touch You know they need. Fill them with the joy of Your presence!

Click here if you need a moment just to be with Him. Let His peace wash over you.

Related Post: He Taught Me How To Live A Life Of Worship 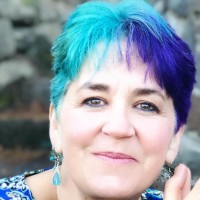 While working as a missionary in Palestine and Mozambique, Elizabeth Bristol found purpose for her wanderlust. She loved feeding people, hitchhiking through the West Bank, and spending a night each week on top of the Mount of Temptation fasting and praying. She’d always thought hanging out with God would be boring and she’d have no cool friends. What a big lie that turned out to be.

Previous Post: « What Happens When You Ignore God?
Next Post: Bottom Line, Can I Really Trust God in Difficult Times? »

We use cookies to ensure that we give you the best experience on our website. If you continue to use this site we will assume that you are happy with it.OkayPrivacy Policy